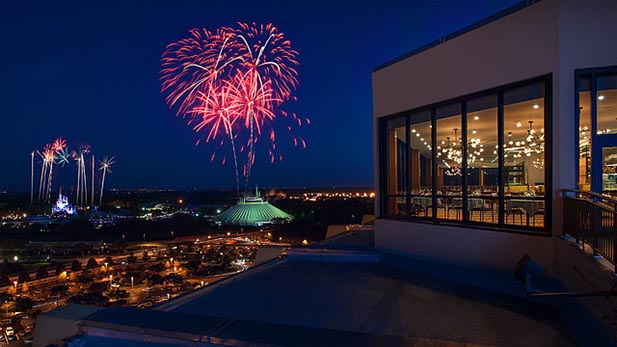 I’m going to try and work through a series of posts breaking down my favorite parts of our recent trip to WDW. We tried to do a lot of new things on our trip, and I think I did a pretty good job of planning our selections, if I do say so myself. For this post, I want to break down my 3 favorite all-around meals from the trip. I based this on food quality, service, and experience.

This was not a new one for us. We tend to do this one anytime we get out to Walt Disney World. The food is pretty solid, especially for being inside a park. The bar (Dad’s Liquor Cabinet at the Tune-in Lounge) is one of the better in-park options, and the long lost cousin service adds a bit of fun to the equation.

The menu is full of American homestyle cooking. After all, “Mom” is back there in the kitchen. We had the Fried Herb and Garlic Cheese appetizer, which while pretty simple, was one of our favorite appetizers of the trip. I had Dad’s Stuffed Pork Chop, which is a massive pork chop, stuffed with apple, gouda cheese and herbs. It was a huge portion, but I knocked out most of it. For dessert, I had Dad’s Favorite Chocolate-Peanut Butter Cake, which was probably one of the tastiest desserts of this trip, and surprisingly, the only time I got chocolate cake (I’m a bit of a chocoholic). I just realized typing this that I had 2 dishes with “Dad’s” in the name, plus a drink from Dad’s liquor cabinet (Mama and I both had the Maui Wowie, which like many other Dad’s liquor cabinet drinks, comes with a color changing glow cube). I mean, I guess it makes sense, I am DaddyDoesDisney, after all.

The extra kick for this restaurant though, is the service. Some people don’t like the approach here, as the servers will give you grief about your elbows on the table, eating your vegetables or “doing your chores” (setting the table). They used to ask you what color the soap is when returning from the bathroom, but they have foaming soap in the bathrooms now, so maybe not anymore (we went after the meal). Our server, our long lost cousin, Liza (I think) was great. She wasn’t as rude as some of the other servers we’ve had there in the past. She gave good advice through the menu when asked, along with saying “gross” anytime we ordered anything that wasn’t her favorite. I always enjoy the interactions here, and it’s that little difference that keeps us coming back every time.

Food wise, this might have been my favorite all around meal of the trip. Celebrity chef, Art Smith, opened this restaurant in Disney Springs since our last visit, so this was our first chance to check it out. It was one of the meals I was most looking forward to, after hearing praise for several of the dishes and drinks on the menu.

The boy got the Bunch of Puppies hush puppies appetizer that came with Ah-mazing pimento cheese to dip. Mama had the Church Lady Deviled Eggs, which we’re also to die for, and I got the famous Thigh High Chicken Biscuits, which while being one of the best things we ate on the trip also probably was enough food for the wife and I to split as an entrée in the future. My mom had the Fried Green tomatoes which were also very good.

For an entrée, I had the Chopped Pork Barbeque Plate. The barbecue was decent, but as a Texas boy, I wasn’t overly impressed. The star of the plate (and the reason I got the dish) was the mac-and-cheese, which is probably one of the better mac-and-cheese on property.

I also had one of my favorite drinks of the trip, the Moonshine Mash, which is made with Watermelon moonshine, watermelon, lime and simple syrup. It’s simple and refreshing, and tastes like summer in a glass. The menu is full of different, delicious sounding drinks though, so if watermelon’s not your thing, you should be able to find something. I had a really hard time picking something.

For dessert, I had the hummingbird cake, which might be my favorite dessert of the trip. It’s a pineapple-banana cake (2 of my favorite flavors in Disney dishes), and was extra moist and delicious. The other desserts that were had at our table also probably rank among the favorites of the trip.

All in all, if you’re on a foodie trip to Disney World, this is one stop that is not to be missed.

Oh, we getting fancy now. This fine dining restaurant at the top of the Contemporary Resort is often considered one of the best dining experiences at Walt Disney World. It doesn’t hurt that we managed to keep the boy pretty calm for the extent of our 3 hour meal. We were initially worried that our 7:00 meal wouldn’t get us through to the fireworks, but we hadn’t even ordered our desserts by the time the show started.

The food here is spectacular. A staff of world class chefs churn out some of the highest quality dishes on property. For appetizers, the wife and I both got sushi dishes, she got sashimi, but was later wishing she got the roll that I got. I had the New Moon Roll, which is made with Maine Lobster, Avacado, Barbecue Eel, Rice pearls and Dragon Sauce. It was one of the most beautiful and well made rolls I’ve ever had (and I used to work at a Japanese restaurant, and even have my own roll on the menu there).

For entrees, Mama had the Oak-Fired Filet of Beef which comes with a tamarind barbecue sauce that apparently was on the original menu for the restaurant and brought back by the current chef. It was her favorite steak of the trip, and we were on the Deluxe Dining Plan, so there was a lot of steak consumed. I ordered the Grilled Pork Tenderloin, which was probably the best pork dish I’ve ever had in my life (and I’m getting old).

I had some kind of chocolate dessert that was kind of uninspiring. It appears to have been rotated off the menu currently, and the lack of a kick butt dessert is what has me championing Homecomin’ for overall food quality.

The bonus though, for the California Grill, is its location. From the top of the Contemporary Resort, you have panoramic views of the Magic Kingdom Park, and they have viewing decks on either side of the restaurant. We grabbed a great spot for Happily Ever After out on the deck (until the boy decided it was the perfect time to go to the restroom, haha) that almost made up for the fact that the rain kept us from seeing HEA from inside the park (we’re going to have to book a dessert party or something next time). Overall, a fabulous experience, good drinks, excellent entrees and sushi. It’s one of the pricier restaurants on property, but if you get the chance, I definitely recommend trying it out at least once.

Thanks for checking in as I go over some of the highlights of our trip. I look forward to sharing more of my favorites and helping you to plan some highlights of your own.

This is a text widget, which allows you to add text or HTML to your sidebar. You can use them to display text, links, images, HTML, or a combination of these. Edit them in the Widget section of the Customizer.